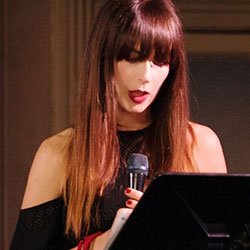 For one year he has been the head of the secretariat for editing of TGR RAI Veneto and collaborates with the organization of the TG News meeting of all major European Broadcasting Union (EBUs).

Since 1998 she has been working for the International Institute for Opera and Poetry created by UNESCO in Verona and the UNESCO Office in Verona, organizing the following cultural events:

1998 – Verona – International Rap Festival for Peace and Tolerance; International Seminar on Vladimir Nabokov on official celebrations for the centenary of the writer’s birth, in collaboration with the Russian Embassy in UNESCO and Bolchoi Theater in Moscow; Celebrations of the 50th Anniversary of the Declaration of Human Rights (Verona, Paris, New York); Conference of Evgeny Sidorov, Permanent Representative of the Russian Federation to UNESCO on “Russian Culture Today” at the University of Verona;

of Oman – Opening of the new Open Air Theater “Al Fleij Castle for Arts” in the presence of the UNESCO General Manager and the Sultan of Oman; Verona – International Singing Competition on “La Dama di Picche” with concerts in Paris, at UNESCO and at Bolshoi Theater in Moscow; Verona, Paris – Organization of an International Poetry Contest for the translation of the Puskin poem “The Prophet” at the UNESCO official celebrations for the centenary of the writer; Bethlehem, Palestine – Inauguration in Bethlehem of the International Museum of the Nativity sponsored by UNESCO in the presence of Yasser Arafat and President of the Council M. D’Alema;

2000 – The World Day of Poetry in Verona with the seminar “The Poets of the Night” in collaboration with the Literary Society of Verona and Budapest with a show on a ship on the Danube with 37 poets aboard. Support and collaboration at the Romapoesia and Mittelfest Poetry Festival of Cividale del Friuli; Singing Competition on “Romeo and Juliet” with final selections in Budapest and concerts at the Hungarian State Opera House, Kiev Opera, Ludwigshaven Theater;

2001 – Video Educational on La Traviata opera in Budapest at the Opera Theater, under the “L’Opera Italiana nel mondo” program with the support of the Italian Ministry of Foreign Affairs;

2002 – Video education on Rigoletto in Bucharest, at the Opera Theater, with the collaboration of the Ministry of Foreign Affairs (DGPCC); 2003/2004 – International Competition of Canto on Don Giovanni in Verona.

Since 2001 he is Assistant to the Founding Chancellor of the World Academy of Poetry, Prof. Nadir M. Aziza and also holds the position of Secretary General of the World Poetry Academy organizing cultural events of music and poetry including all the celebrations of the World Day of poetry set up by UNESCO on 21 March each year in Verona (headquarters of the Academy), Rome, Milan, Paris, Marrakech, Montreal, Senegal.

Among the main events organized for the World Academy of Poetry:

2001 – Constituent Assembly of the World Academy of Poetry with the participation of 60 poets of the 5 continents including some Nobel Prizes such as Wole Soyinka or Derek Wallcott and among the founding partners Mario Luzi. Organization of a poetry and music show at the Basilica of St. Zeno in Verona;

world poetry at the invitation of Minister of Education Jack Lang; Marrakech – Inauguration of the First Decentralized Office of the World Academy of Poetry for North Africa; March 2003 – Verona – Celebration of the World Day of Poetry on “Poetry and Peace”. Organization of the show “The Azaleas of the 5 continents”, music and poetry in the Cathedral of Verona;

November 2003 -Verona – “Music and Poetry for New Europe”, celebratory event of the Seminar of the Italian Presidency of the European Union, with the patronage of the European Commission and of the Italian Ministry of Foreign Affairs. Organizing an exhibition at the Grand Guard on the 10 new EU member states, a conference at the University of Verona and a show at the Grand Guard on the music and poetry of the 10 new member states;

June 2004 – Verona – The Poetry Olympics, “The New Parnassus”, on the occasion of the Athens Olympics, an ancient and contemporary Greek music and poetry show at the Gran Guardian Palace;

March 2007 – Verona – World Poetry Day on the occasion of the centenary of Léopold Sédar Senghor;

March 2008 – Verona – World Poetry Day – Homage to Italian Poetry of the Twentieth Century, with Maria Luisa Spaziani Alessandro Quasimodo and Q-Projet with Alberto Fortis for the performance of poetry music and dance;

2011 Decennial of the Constitution of the World Academy of Poetry, Corner of Poetry cycle of encounters beginning of a journey (Pesaro);

2015 Poetry and Peace Debate Importance of the poetic word in communication;

2017 Poetry as the DNA of the World: Identity and Translation in the Contemporary World.

Since 2012, she has been organizing the Catullo Prize in the framework of the MED 21 Prize Network created by Prof. Nadir M. Aziza

Since 2010 she has been working with the press office and institutional relations of the Lirica Oscar (International Opera Awards) in collaboration with the Verona Foundation for the Arena.